There was no promise that this widow of three children would ever find love again. But now Brandi just may have married the man of her dreams!

Brandi Broke (née Newbie) is a well known resident in my player stories in The Sims 2 in Pleasantview. She is the daughter of the late Bob and Betty Newbie, the widow of Skip Broke, the wife of Stacen Edwards, the mother of Dustin, Beau and Junior Broke and Stacey Edwards, and the adoptive mother of Kate and Amin Edwards. Brandi is voiced by Gerri Lawlor and is 22 days from being an Elder.

In my player stories Brandi Broke first appeared in the welcome wagon for Jestyn Leishman, and later for Suzy Parker and her parents. It was presumably during the second welcome wagon where Brandi first met my CAS, the outcast Stacen and his daughter Kate Edwards. They later met when Stacen invited the town gangster Kingston Starker over for a fighting session - Brandi appeared as a surprise guest.

When I first played the Broke Family I decided to have Dustin throw a birthday party for Beau Broke. The guests were Dustin's new friend Jestyn, and his then girlfriend Angela Pleasant. Brandi went into labour two afternoons later, where she gave birth to her third son Skip-Junior Broke - Junior for short.

When Stacen was still recovering from his Starker ordeal, he successfully befriended Brandi Broke, and the Townie Brandi Letourneau, making them the first friends Stacen had ever had. I had Stacen adopt a Child, a computer generated orphan named Amin Edwards. During this time Stacen invited Brandi Broke over. I had Stacen attempt a romantic interaction with Brandi, which she accepted. Soon Stacen invited Brandi Letourneau over so that he could introduce his two best friends to each other. Brandi Broke and Letourneau didn't always get on due to their different interests, but because they had more in common than out, they became good friends.

Brandi Broke and Stacen had one biological child - a boy named Stacey Edwards. Brandi is now employed in the Culinary Career, starting off as a Waitress. She has long since made friends with Nina and Dina Caliente. 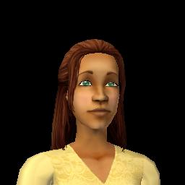 Retrieved from "https://csydes.fandom.com/wiki/Fanon:Brandi_Broke_(C.Syde)?oldid=88393"
Community content is available under CC-BY-SA unless otherwise noted.