Until he reached adulthood, Stacen was the most unpopular guy you could find. Whoever thought he'd be lucky enough to marry the kind-hearted widow Brandi Broke?

Stacen Edwards is a playable resident in my player stories in The Sims 2 in Pleasantview. He is the husband of the widowed Brandi Broke, the father of Kate and Stacey Edwards, and the adoptive father of Dustin Broke, Amin Edwards, Beau and Skip-Junior Broke. Stacen is voiced by Stephen Kearin and is 29 days from being an Elder.

Stacen never had any friends before he reached adulthood, and his parents never gave him the respect and attention he deserved. Nonetheless, when Stacen had his own child Kate, he did everything he could to make sure Kate's childhood wasn't nearly as bad as his own. Unfortunately, no one else gave Stacen credit for all the care he had given his daughter. As far as they were concerned, Kate had made it to teenage-hood on her own - aside from what she learnt at school.

Stacen's age is very inconsistent with the age of his daughter. He is on his first day as an adult, but Kate is already on her first day as a teenager. In the Sims, this sort of age inconsistency is possible when creating Sims in Create a Sim but in real life and the Sims 2 in-game, this is clearly impossible. I have confirmed that neither of them have had access to Elixir of Life, Life Fruit, or a Sim Modder, which only makes things even more illogical.

The Edwards family - Stacen and Kate Edwards - became my third CAS family in Pleasantview. Stacen soon met and made enemies with Kingston Starker, the town gangster who had moved into the neighbourhood a few days after Stacen. Kingston quickly identified Stacen as his most vulnerable victim yet. Stacen took his humiliation out on Brandi Broke, whom the game had randomly chosen to accompany Kingston to Stacen's house; and Brandi Letourneau, a local Townie who was passing, by chance not long after Brandi Broke left. Stacen initially thought that Brandi Letourneau was Brandi Broke due to their physical similarities. Also he never expected there to be two local residents with the same first name.

Before Stacen had recovered from his ordeal, having been picked on by Kingston, he went round insulting any Sim he came into contact with - Tosha Go, Dina Caliente, Meadow Thayer and Randy London. He tried to pick on Lilith Pleasant but as she wasn't a very nice Sim herself, she didn't take Stacen's insults seriously. A few days later Stacen got a job in the Science Career where he received a Chance card. He chose to try the blue liquorice over the red which earned him a Logic skill point. Unfortunately he also got fired due to his poor job performance. Many of my Sims weren't very good at keeping on top of their careers while I was still new to the Sims. He soon got a job in the Military career and received another positive chance card outcome. Stacen also received a promotion, which was at least partially due to him not needing any skill points to reach level two.

After receiving a visit from the second Repossession Man in Pleasantview, Stacen realised that his life was long overdue for a fresh start. He continually rang Brandi Broke and Brandi Letourneau to try and make friends with them. The two of them had previously witnessed the pain and misery Stacen had recently suffered which probably explains why they forgave him for taking his humiliation out on them. They came to be friends and then best friends. For the first time in his life Stacen had some friends. He also took the time to improve his relationship with his daughter. Although indeed he had given her all the care she needed, he'd never troubled to get to know his daughter for who she was. Until then, Kate had just been a daughter to him.

Even though he and his daughter's relationship has grown closer than before, Stacen convinced himself that he needed to make a request for adoption. The following day the third Pleasantview Social worker came to deliver Stacen's new son Amin Edwards, a computer generated orphan. It was during this time that Stacen invited Brandi Broke over, were he made his first attempt at a romantic gesture which was successful. Stacen then invited Brandi Letourneau over, as he was quite keen to introduce his two new friends to one another.

Stacen and Brandi Broke fell in love a couple of months later. The two of them were soon married after everyone had believed them to be worlds apart. They are the only couple in my gameplay to have a honeymoon. Stacen's children Kate and Amin were adopted by Brandi Broke as their mother, while Brandi's sons were adopted by Stacen.

Stacen and Brandi had one biological child - a boy named Stacey Edwards. After several months Kingston returned to try and antagonise Stacen again, only for Stacen to come out on top - even though he had fewer Body points. Kingston was soon arrested for the many crimes he'd committed, leaving his Alien son Rifle to continue life on his own. Both Stacen and Kingston disapprove of their son's friendship. Many Sims believe that Rifle is aiming to be his father's successor. Stacey, Lucy Burb and Chloe Gonzaga are the only Sims to know that Rifle has no intention of becoming a gangster like his father. 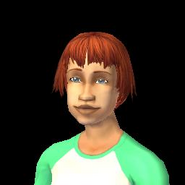 Retrieved from "https://csydes.fandom.com/wiki/Fanon:Stacen_Edwards?oldid=88434"
Community content is available under CC-BY-SA unless otherwise noted.